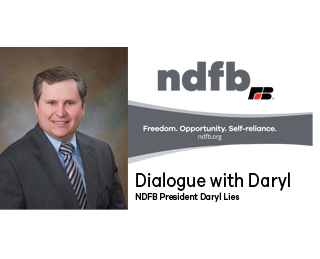 Meeting with a member of the Cabinet

October 8, 2019: Getting a chance to sit down with a member of President Trump's Cabinet and explain our concerns in farm country is very much welcomed and appreciated at NDFB.

Download and listen to the Meeting with the Interior Secretary mp3

Transparency and open dialogue. Whether you believe in everything or agree with everything that President Trump does, the one thing we truly appreciate at NDFB is the openness and availability to his Cabinet members.

Last week, we had a chance to sit around the table with Secretary of Interior Bernhardt. Secretary Bernhardt was very gracious in his time spent listening to landowners’ concerns, especially when it involves easements on wetlands.

At NDFB we appreciated his very straightforward, very direct message that whatever they paid for and have a contract on probably has to be honored. But, when you leave the boundaries of those wetlands, to him it didn’t make sense why there was any jurisdiction for the U.S. Fish and Wildlife Service.

Those words warmed the hearts of those of us around that table. We have to thank Senator Cramer, Senator Hoeven, for having the Interior Secretary visit North Dakota.

He also stated that there are many things that they are working on. One of the things is to actually have an appeals process, instead of just being deemed guilty of a violation, to actually have a process that you can appeal when they claim that you are in violation of those easement agreements.

It’s refreshing to know, albeit they’re small baby-steps, that we are moving in the right direction when it comes to our regulatory burden that is put on us by our agencies in our very own government, right here the free country of the United States of America.

At NDFB, we love the fact that the openness, the transparency, the very directness in answering questions that we get from these Cabinet members and appreciate the Administration and President Trump to make sure that his folks are having discussions with the very people that elected him in 2016.