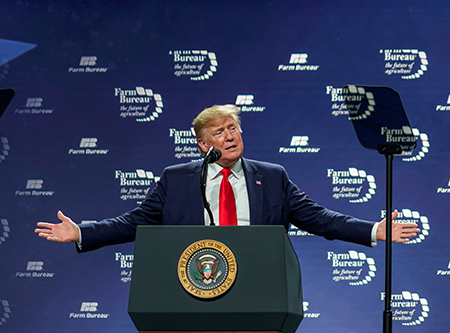 Photo of President Trump at the 2020 AFBF Annual Meeting and Convention in Austin, Texas

The following statement was issued by NDFB President Daryl Lies in regard to Trump signing the United States, Mexico, Canada Agreement:

“Today is another win for agriculture – The United States-Mexico-Canada Agreement (USMCA) has become law. This agreement further levels the playing field with our neighbors, who have continued to be strong trading partners. This is especially true for U.S. dairy, wheat and poultry.

“For farmers, this agreement means our wheat will be treated more fairly, thanks to Canada’s agreement to grade our wheat no less favorably than its own. The agreement also gives U.S. dairy products access to an additional 3.6 percent of Canada’s dairy market.

“We recognize additional steps are needed before the USMCA boosts the ag economy. Canada still needs to approve it, which will start a 90-day clock to implementation. We are optimistic that the recent string of trade agreement successes, including agreements with China and Japan, set the stage for 2020 to begin a stronger decade for farmers and ranchers.”

The USMCA is expected to increase agricultural exports from the U.S. by $2 billion and result in an overall increase of $65 billion in gross domestic product. Canada will increase quotas on U.S. dairy products, benefitting American dairy farmers by $242 million. Canada will also treat wheat imports the same as domestic wheat for grading purposes. Mexico has also agreed that all grading standards for ag products will be non-discriminatory. The agreement also enhances science-based trading standards among the three nations.

President Trump’s signature was the final step in enacting the agreement in the U.S. Mexico approved the USMCA last year. Canada must still ratify the pact, which is expected to occur in the next few months. The agreement will take effect 90 days after all countries have approved it.