When dealing with bureaucrats, some politicians and certain courts, no bad policy is ever truly dead. It can always be revived, repackaged and reimplemented at the expense of a person’s freedoms, local control and state sovereignty. Last week, a judge in South Carolina proved this by ruling to effectively re-instate the Waters of the U.S., Obama era plan, in 26 states. This WOTUS issue was dead and gone, shot down by several courts and the Trump Administration, but now the fight to protect ourselves from the federal government claiming jurisdiction over virtually every puddle and stream in the country seems to have returned. How ironic that the state which succeeded from the U.S. in 1860 over the issue of state’s rights now has a seated judge allowing the federal government into everyone’s back yard to regulate watering lawns. 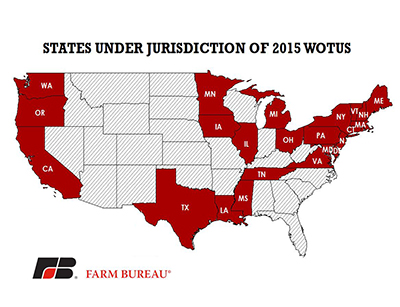 (States in red are currently under WOTUS jurisdiction.)

We are fortunate in North Dakota that we were not drug back into the debate, but it should make us nervous. North Dakota was joined by other states in a case which set aside implementation of President Obama’s plan, and the ruling has been supported by additional states and in other courts, including the U.S. Supreme Court. The efforts were led by Attorney General Wayne Stenehjem, and as it stands now, 24 states are exempt from WOTUS through court action, and 26 states are probably wishing they were with our side.

For now, we can be thankful for the common-sense found in North Dakota, but we should be cautious of how easy it is to bring back over-burdening regulations and bad policy.

Watch AFBF's Don Parrish on RFD-TV in this clip about the rule: